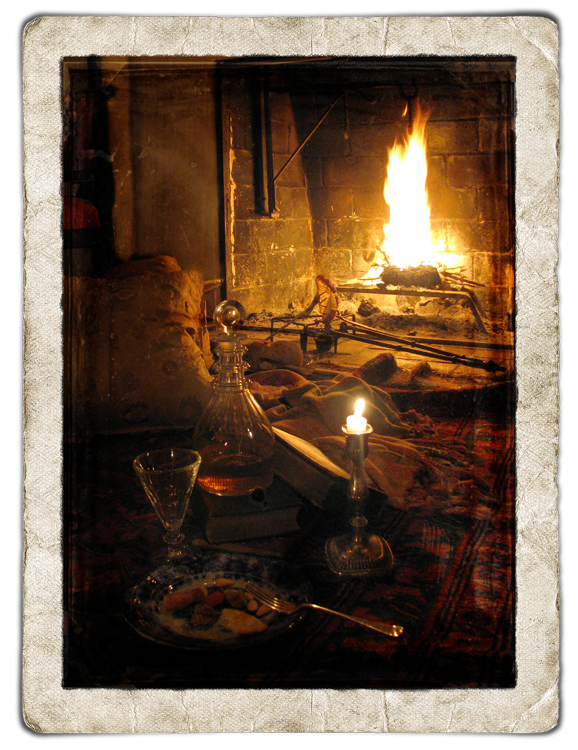 There is a well recognized adage – never deny an Englishman his Cheese Toast. Ever. It seems that Lord Byron was no exception to this rule. Somewhere in the massive quantity of luggage that he had hauled with him to Lake Geneva, he managed to find a small space to wedge this beautiful toasting fork that now lay in front of the fire. I wasn’t surprised. Lord Byron was an unapologetic over-packer. Overloaded with a vast quantity of must-have paraphernalia, his carriage chronically broke down as it made its way across Europe on the way to Lake Geneva. Apparently, you can take Lord Byron out of England, but couldn’t take England out of Byron – he needed his Cheese Toast.

And now this long-handled fork rested upon a trivet in front of the low flames and was quietly toasting a small, skewered piece of bread a delectable golden brown. It seemed a cozy choice for the poets to eat while listening to ghost stories.

A wedge of cheese (Raclette, I believe) sat nearby, softening to an optimal consistency. The melted side of the cheese closest to the fire would be scraped off and spread over the toast. Perfection in its simplicity. A decanter of Sack, or Sherry, rested close at hand as an excellent partner for the cheese. Alas, this charming treat had been completely forgotten when the group made their way upstairs to their beds.

It was hard to pass up such a delicious morsel, but I was curious to see what was in the room next door. I turned my back to the fire and made my way to the hall. 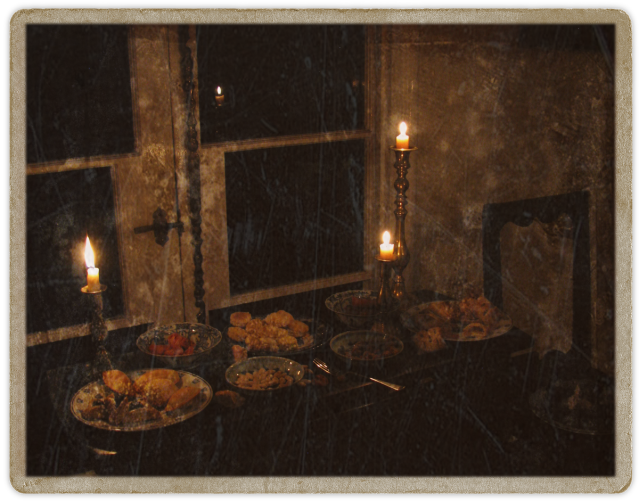 It was still a dark and stormy night.

With my foodie instincts on high alert, I reached the sideboard at last! What had this small group of five English free-thinking writers eaten tonight? The candles were burning low, but I was able to see what I had traveled there for.

Interesting…, it appeared that the Napoleonic wars and the cold weather caused by the eruption of Mt. Tambora had little effect on with what Lord Byron entertained his guests, with one exception. I had hoped to find Fraise du Bois, but alas, no alpine woodland strawberries to be seen.

The fierce weather outside could not distract me from a glorious cheesy smell wafting up from a plate of rather innocent looking little puff pastries. Their aroma was braver than their appearance – mummmm, no mistaking the pungent, savory smell of Gruyere cheese. The cook wisely used plenty of it in baking them. They appeared to be Petits Choux Ramecains, a particularly delicious edible in the early 19th century.

Also sharing the table were plates of Sweetmeat and Jam tartlets, sliced ham, dried apricots, candied ginger and Gateaux Madeleines. Unfortunately, several plates were emptied of what they had once held, sigh.

So despite war, cold temperatures and stormy weather, Byron was still able to be a generous host. The rather simple cold buffet offerings looked to be inspired by a French chef cooking for an English nobleman plagued with a prodigious amount of debt. Not surprising, Geneva was only recently liberated from French control and Lord Byron was an enthusiastic Napoleon groupie. His private horse carriage was custom-made to duplicate one of Napoleon’s.

I noticed an abundance of sweets and only one choice of meat offered – unusual for a typical late-night meal during this overtly carnivorous period. It may be that the chef was mindful of the guest’s proclivities – Percy Shelley had a weakness for sweets and was also a vocal vegetarian. The choice still appeared limited though, perhaps due to Byron’s avoidance of eating with his guests? He remained exceedingly fixated on the degree of rotundity of his waist.

Had Byron eaten earlier? I think I will take a peek in his private writing room next door for any indication. 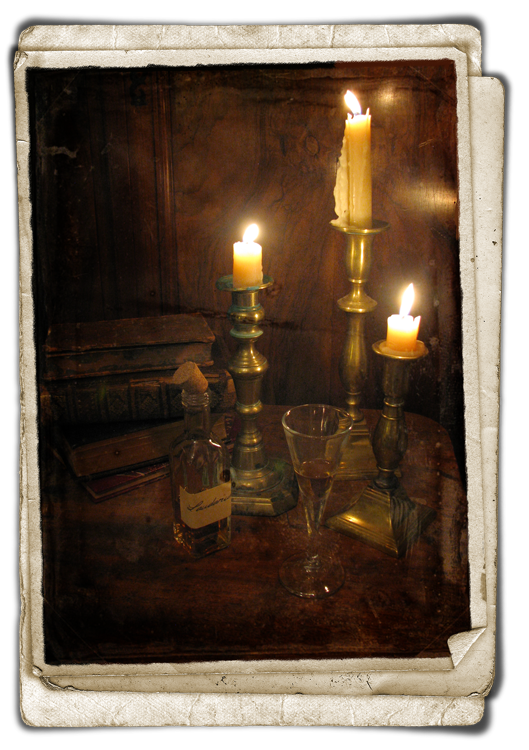 It was a perilous trip to the sideboard across Byron’s library; stepping over piles of books, I successfully managed to keep my skirts out of harm’s way from the numerous lit candles in silver holders scattered about the floor. I made a mental note to myself that it would be healthier to wear trousers on successive voyages.

On my way, I happened to notice an unpretentious bottle resting on a small wooden table. Its cork unsuccessfully thrust into the bottleneck, it stood next to a diminutive wine glass that appeared half-full with a golden brown liquor.

The label read Laudanum. Hmmm, the tincture of opium – a potent drink of choice and particularly effective in inducing a soporific retreat for poets seeking visions, inspiration and a really good night’s sleep.

I picked up the tiny glass. In one quick whiff, I smelled brandy and just a trace of cinnamon. Laudanum is notoriously bitter and was often drunk diffused into a flavored liquor to help hide its wretched taste. Treacherous stuff this laudanum, it was considered the “cure all elixir” for a vast array of ailments ranging from flatulence to teething problems in infants. Percy Bysshe Shelley was known to depend on Laudanum’s languid effects and many believed that Lord Byron’s wild mood swings ensued from his use of the drug. I wondered if Mary’s horrifying dreams were summoned by the laudanum as well.

As thought-provoking this small bottle was, I turned around and continued across the room to my original objective, a table laden with midnight mouthfuls for Lord Byron’s guests. I followed my nose and my nose did not disappoint me… My timing was perfect, although it was nearly dawn, I arrived just after Lord Byron and his guests had retired for the night.

Fortunately for me the candles were still lit, it seemed that the servants were unaware that everyone upstairs had finally drifted off to their beds. Those downstairs would be waking up soon enough for breakfast, no need to rush through their own dreams I suppose.

A bohemian scene greeted me in the library of the Villa Diodati. Silk pillows lay strewn about on a Persian rug in front of the fire. Claret and sack decanters sat haphazardly about and small, half-filled wine glasses teetered on vast piles of books.  A fitting scene for a group of young romantic poets determined to write something terrifying yet witty.

A cat sauntered by me.  As I absent-mindedly reached down to stroke its head, I was startled by a large bird that flew through the hallway across the open doorway. Apparently Lord Byron’s menagerie had settled in comfortably alongside him at the villa.

So, despite the exceedingly dramatic and monstrously electrifying dreams manifesting themselves in Mary’s head upstairs at that very moment, I decided to wander over and peruse the sideboard. Mary Shelley went to bed that evening having accepted the challenge to write a ghost story.  Describing her sleeplessness during that stormy night at Lord Byron’s villa she wrote, “…my imagination, unbidden, possessed and guided me, gifting the successive images that arose in my mind with a vividness far beyond the usual bounds of reverie.  I saw, with shut eyes but acute mental vision.”

“I saw the pale student of unhallowed arts knelling beside the thing that he had put together. I saw the hideous phantasm of a man stretched out, and then, on the working of some powerful engine, show signs of life, and stir with an uneasy, half-vital motion…his success would terrify the artist.”

The Doctor “…would rush away from his odious handiwork, horror-stricken.  He would hope that, left to itself, the spark of life which he had communicated would fade, that this thing, which had received such imperfect animation, would subside into dead matter. He hoped that he might sleep in the belief that the silence of the grave would quench forever the transient existence of that hideous thing.”

Dr. Frankenstein sleeps “…but he is awakened, he opens his eyes, and behold, the horrid thing stands at his bedside, opening the curtains and looking at him with yellow, watery but speculative eyes.”

Mary Shelley’s ghost story had begun and the tale of Frankenstein was born.   Now that her story has been told, I am ready to travel back to that blustery evening at the Villa Diodati.

It will be a dangerous night to travel to, but the food should be worth it. 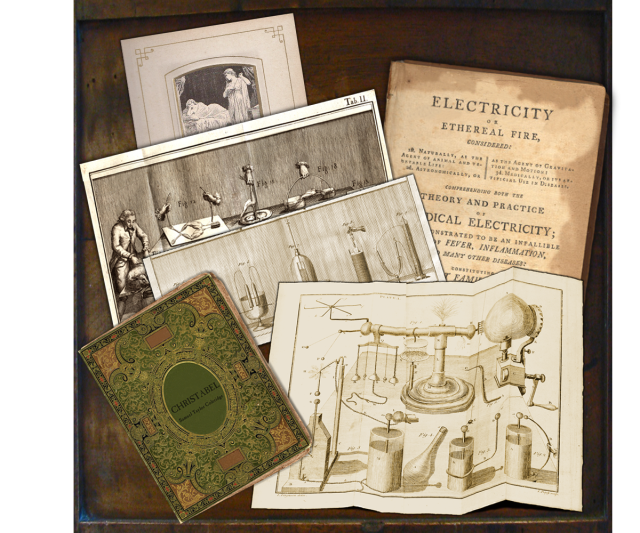 Lord Byron and his guests spent the stormy evening in the Villa Diodati’s library immersed in conversation and the talk was of metaphysics and experiments in the reanimation of dead things using the newly discovered force of electricity.

Invoking darker horrors, they read stories of ghosts and tales of the dead from a book entitled Fantasmagoriana.

Minds were fertile with imagined terrors and as Lord Byron read aloud a haunting passage from Christabel by Samuel Taylor Coleridge, Percy Shelly suddenly leapt up and ran shrieking from the room.

In the smokey candlelight, Percy had hallucinated that Mary’s chest had metamorphosed into a pair of eyes coldly staring at him.

This is my journal, a timeline of my temporal travels. You may consider each entry as an installment in the continuing narrative describing my world and my voyages.

I am a Temporalnaut, a Time Tourist if you will. I choose to visit the past and explore dining in history. All food has a tale and surrounding each meal are the stories of the illustrious as well as the infamous of history and legend. You see, where I come from, time travel is common and legend is real.

I choose a different story and a singular meal to visit in each voyage to the past. I will chronicle these excursions within this journal and share with the reader photographs, musings and of course the food that I encounter.

If you are curious as to how the journey started or what this is all about, I suggest you begin at the beginning.

The "infinite scroll" mechanism on the right side of this electronic journal will allow you to follow my story from its introduction, or you may simply choose to visit the archives contained under the "Voyages" area.

Welcome to the journey. 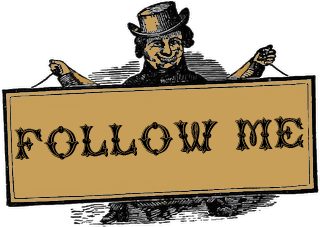